Temptation of the Maiden

Naoko Katsuda (勝田 奈緒子, Katsuda Naoko) is the daughter of a powerful local politician and Noriko Katsuda and the friend of Yuka Kanzaki who has employed Kintaro Oe as part of his campaign team to run for a third term as mayor.

Because of Juzo Katsuda's overprotective nature and reputation (Apparently, a boy that had stolen Naoko's panties in school was never seen or heard from again), Naoko has lived most of her life in his shadow, which has resulted in her developing an unhealthy father complex.

After meeting Kintaro Oe (and catching him in the middle of his toilet fetish), she decides to continuously tease him, wearing revealing outfits and putting herself in vulnerable positons. She asks Kintaro to tutor her in math, just to mess with him even more. After finding interest in Kintaro's notebook, Naoko steals the notebook in hopes of finding out what Kintaro may have written about her.

However, Naoko finds out that Kintaro had seen through her acts, which enrages her. When she meets Kintaro again, she cuts up her own clothes with a pair of scissors, giving the weapon to Kintaro and screaming out loud to alarm everyone (her father and his men) in her household.

Accusing Kintaro of climbing through her window and attacking her, she believed that Kintaro would try and make excuses. However, Kintaro kisses Naoko in front of her father and his men, boldly stating that he had fallen in love with her. Naoko's father orders his men to beat up Kintaro, which he willingly submits to, only for Naoko to finally realize the wrongdoings in her ways and intervene, but after Kintaro had taken a grave amount of beatings.

Escorted out of town by Naoko's father in his car, Kintaro meets Naoko by the road, who returns his stolen notebook and asks that he forgive her. Before Kintaro departs, she asks him to return if his wounds heal and he doesn't hate her, to return to the town, and take her virginity. With a farewell kiss on the cheek, Naoko runs back to town for school and Kintaro continues on his adventures.

Naoko later makes a short appearance in Episode 6, where Kintaro calls for her help as a voice actress whilst temporarily working at an animation firm. 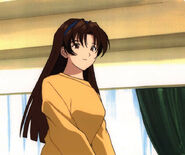 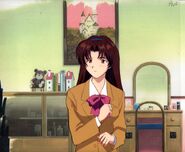 Naoko in her room (cel)

Naoko in her room (cel) 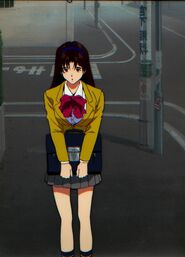 Naoko in her school uniform (cel) 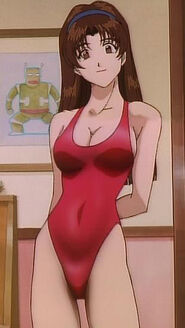 Naoko in her red swimsuit