Hiromi Tsuru (Japanese)
Tiffany Grant (English)
Cinzia De Carolis (Italian)
Madame President (女社長, Onna Shachō) is the owner of software company called T.N. Software. She is a strong-minded, independent and intelligent woman. Moreover she is really attractive and wears expensive, sexy (and revealing) clothes. She does not believe in showing sincerity to men, because of their true intentions.

After almost crashing into Kintaro while riding on his Crescent Moon to his job with her yellow Ferrari, she gives him ten million yen to cover his cleaning expenses and a possible medical bill. Believing it to be too much money, Kintaro tapped her shoulder to get her attention and return some of it, only for his hand to be smacked away in disgust. Confused, Kintaro got his bike fixed by a nearby bike shop run by an elderly couple and continued on his way.

Coincidentally, Kintaro runs into the president again, as the company that he was going to work at was hers. But instead of a programming job, Madame puts Kintaro on janitorial duty, cleaning the bathrooms, windows and halls. Whilst cleaning Madame President's toilet, his toilet fetish takes over only to have Madame herself walk in on him. Afraid of losing his job as a meme janitor, he passionately asks that she not fire him and instead give him a real job at her company. Interested in his abilities, Madame asks him to prove his skills, assigning him to program something on one of the computers of the company. Having pulled an all-nighter studying BASIC (by which he practiced coding on a paper drawing of a keyboard the night before), Kintaro has horrified to find that the company was instead programming with C Base coding, a coding language much more advanced than BASIC.

Having failed to prove his mettle, Madame President fires him as a janitor and tells him to leave at once. Kintaro asks that she give him a chance at her company, even going as far as not wanting a salary and taking on any task she may have for, no matter how disgusting it may be. Madame complies, and Kintaro happily cleans, studies while learning C Base from Madame's other employees.

One night, after accidentally finding himself hiding in a locker in the women's changing room (where Kintaro, of course, took studious notes in his notebook), he leaves his hiding spot late at night to find Madame's "computer" still on, and turns it off for her, believing that she would admire his conservation-minded actions. However, the "computer" Kintaro had unplugged was actually their data server, which contained the program which they had been working on for three months. After learning what Kintaro had done and learning he had "already spent" all of the money she gave him, Madame President finally snapped. Furious with what he had cost her company and having accidentally seen the notes he had taken on her, Madame kicks him out of her company, not to be seen again.

A week after the data server incident, Madame President and her employees are working restlessly in hopes that they might be able to complete their lost work in time, but with no avail. To everyone's surprise, Kintaro had sent a disk containing what Madame President believed to be a backup of their program (which she believed he downloaded prior to the data crash, so that he would return it later as a prank), only to find that it was not theirs: Kintaro had written the entire program himself, adding numerous improvements and new ideas while also making it more user-friendly, thanks to what he had studied and learned from them. He had even taken the time to add a screensaver, displaying chibi-Kintaro saying, "I've learned a lot. Thank you very much! Goodbye."

Realizing her mistake, Madame and her team rush downstairs and outside to try and find Kintaro before he would disappear again, only to be stopped by an elderly couple looking for Kintaro themselves as well. To Madame's surprise, Kintaro had given the money he got from her to that elderly couple, after he overheard them having trouble paying a debt with the Yakuza. Realizing the amazingly honest and selfless man she had ruthlessly kicked out and thrown away, Madame President gets into her Ferrari and speeds off, hoping to run into Kintaro again.

Madame makes a second appearance in Episode 6, where Kintaro calls her to ask for a computer graphics program while temporarily working at an animation firm. After Kintaro is gone, she runs off with the girls to meet him again, giving Naoko and Noriko a ride in their Ferrari.

Madame President on the Cover of Vol 1 of Golden Boy 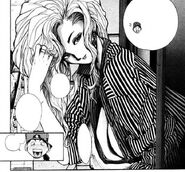 Madame President talking with Kintaro outside a window

Add a photo to this gallery
Retrieved from "https://goldenboy.fandom.com/wiki/Madame_President?oldid=4081"
Community content is available under CC-BY-SA unless otherwise noted.